Seeking info on 360 camera on gimbal

I'm considering adding 360 video/picutres to my hobby. From what I've researched, the fundamental problems (at least the ones people are talking about) are poor image/video quality, and the need to stabilize the 360 camera. I fly a Phantom 3 advanced which is not modified in any way.

Right now I'm leaning toward the Nikon KeyMission camera for its quality, and a standalone 3-axis gimbal (I'm considering Feiyu Tech FY-WG 3-Axis Wearable Gimbal) to achieve a smooth platform. I am thinking about mounting the gimbal beneath the landing gear (which will require a creative launch platform and necessitate catch landings). The camera is about 7 ounces, and the gimbal weighs about the same. (all batteries included).

Concerns:
1. gimbal isn't specifically designed for the Nikon 360 camera. It is designed for a GoPro which is a few ounces lighter...Assuming I can figure out how to adapt the clamp mount to the Nikon camera, will I burn out my gimbal motors with a heavier or asymmetric load? (I need to mount the camera so that both forward and rear facing lenses aren't obstructed)
2. This configuration adds about a pound of mass to my P3A. I'm considering hanging dummy-loads from my P3A to see if flying with the extra mass would cause harm to the flight characteristics and airframe. I realize that I'll burn through batteries faster, but I'm OK with that, so long as I don't damage anything.

I've seen a few solutions from other members for other cameras...I haven't seen a gimbal-stabilized 360 cameras yet, though. I think I want to stick to the Nikon camera, because I don't want to go through with this mod if the resulting 360 images/video isn't worthwhile.

Anyone have any experience with the Nikon Key Mission 360 camera? How about the Feiyu Tech FY-WG 3-Axis Wearable Gimbal? Anyone flying around a P3A with an additional pound of "cargo" hanging underneath it?

Thanks for any [email protected]

Well, I tried my dummy load flight (Concern #2), and I'm not happy with the results. I slung a bunch of washers below my P3A (rigidly, they didn't move, shift or swing) and tried out flying. The P3A with 16 oz of mass below the camera didn't fly very well. I was able to launch and hover, but it was clear to me that the airframe and motors were under a lot of strain. The P3A also was in a dynamically unstable configuration. When I moved the a/c then stopped, the motors (and leveling algorithm) quickly stopped the momentum. The a/c never achieved an acceptable hover (equilibrium), however. It began to "hunt" around in a progressively widening circle, seemingly chasing the new load....I didn't like what I was seeing, so I "held" the aircraft in a steady hover with the sticks, and quickly ended the flight.

Observations:
1. Although the P3A has the motor power to lift and manipulate the extra pound of mass, the hover algorithm is tuned for a higher center of mass. Slinging a significant weight underneath the a/c's center of gravity means that the stability algorithms would need to be re-tuned to match the new loading configuration. Although this could probably be approximated (through manipulating the DJI Go software settings--gains, etc.) there's no guarantee that one could tune it just right.
2. Even if the a/c could be tuned for the change in center of gravity (cg), I was uncomfortable watching the motors and the airframe under such stress. I concede that perhaps the aircraft is always under that kind of stress when conducing high performance maneuvers (quick ascents, rapid turns, etc.) and you just don't get to see them up close (as when the aircraft is straining to maintain a hover), but I'm afraid that the likelihood of failure is much greater than I'm willing to risk with so much weight underneath.

Remember--My 16 oz of additional weight was designed to approximate the mass of the Nikon Key Mission 360, a Feiyu-WG 3-Axis gimbal (or similar) and the weight of batteries and mounting brackets. I may consider trying my dummy load test again, this time with only 8 oz or so (half the weight of the previous test) to simulate just carrying the 360 camera and a light mounting bracket...(the battery is included in the camera's mass.

Another option is to select a lighter camera (like the LG 360 cameras), but I was underwhelmed by their video quality.

Sorry, no pictures. ---Shame on me. If I decide to test with 8 oz, or come up with an acceptable and lighter configuration, I may re-create my 16 oz test so I can document the a/c performance under heavy load again.

Anyway, if anyone has experience with a "loaded" P3A, then I'd love to hear about your experiences. I am beginning to believe that to get a stabilized 360 picture will require the replacement of the stock p3A camera and gimbal, (in other words, not flying with two cameras and two gimbals) or a drone with better lift capabilities.
--That's all for now!

Hi here is my first test with a Samsung Gear 360
To watch it you need a 360 enabled browser (e.g. Chrome) - and you need to put in youtube settings the resolution to 4K.

This is how my setup looks. You can easily replace the Samsung with the Nikon Keymission. 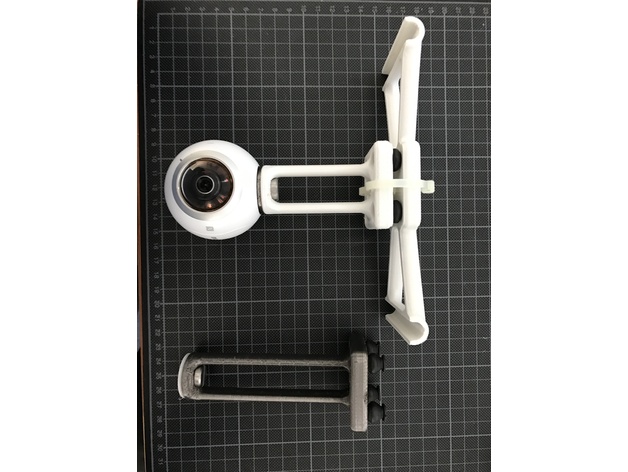 The setup I designed you can find on Shapeways


or on Thingiverse if you have your own 3D Printer

berndgill said:
Hi here is my first test with a Samsung Gear 360
To watch it you need a 360 enabled browser (e.g. Chrome) - and you need to put in youtube settings the resolution to 4K.

This is how my setup looks. You can easily replace the Samsung with the Nikon Keymission.

The setup I designed you can find on Shapeways


or on Thingiverse if you have your own 3D Printer

360 Camera Mount for DJI Phantom 4 by bgill
Click to expand...

-- Facinating.... How does that work?
Does it fly ok? any noticeable strain? How heavy is the Samsung? I strapped a Kodak 4K 360 to a P4... but behind the camera, on the struts, and yes, under the ground sensors (yeah I know). Did some test flights.... it was strained but got up ok.. Not bad on vibration. I took the rig to Bora Bora , Tahiti. Took it way way up..Worked fine until I tried to get it down.. It kept twirling around... and was a mess getting on the ground. And I was on a dock, on the ocean... so I eventually was out in the coral when I nabbed it. Scary. So I haven't tried again ... Though I want to.... Great idea on your part.
M

I am wondering how stable the video is. The camera that comes on our Phantoms is mounted to a 3 axis gimbal to provide perfect stability. I'd think that this setup would be shaking badly, producing a very shaky video. No?
Toggle signature
Phantom 3S

mdowney58 said:
I am wondering how stable the video is. The camera that comes on our Phantoms is mounted to a 3 axis gimbal to provide perfect stability. I'd think that this setup would be shaking badly, producing a very shaky video. No?
Click to expand...

Hi... Actually the video it is not bad..I would say it is good. I just went and looked at the footage again... When the P4 is moving around, climbing for example, it could be better..but not as bad as you would think. Other parts are ok. other parts are great. One part I had the bird up very high...and it was rock solid. I had to check the time code to see that indeed it it was not in pause, it wasn't. Rock solid...and amazing over a so. pacific island. I got some amazing screen captures. and the video is very usable. I just have not found a good venue and software for it. Kodak has a new full 360 cam. two lens on one small cam. I want to try it again, finding a better place for the camera. I the key is a mount, some dampers and being directly below the camera ...and not going too high... Let me know if you try,.

very nice. Thanks for sharing. What camera.,?

I am now having major issues with GPS signal loss and wacky flight... I lose GPS signal and the drone starts drifting off. I managed to get it back but crashed it into a light pole... everything seems fine. But scared to fly again with the 360 cam... anyone have any ideas?

What kind of mount?

What kind of Phantom do you have?

GPS trouble, have you calibrated your compass recently? How is the compass status and IMU status?

Flying trouble, have flown in ATTI mode? That would give you more control but you lose RToHome.

For 360 software editing I swear by the latest power director which has full support for this and tutorials.

Power director ? can you use different camera makes?.

yo-dude said:
Power director ? can you use different camera makes?.
Click to expand...

360 editing - power or action director on PC. I usually just stitch in gear 360 app on phone and upload to YT from there.

Mount - 6" 1/4 20 rod attached to gimbal guard via locknut and shaven down wingnut. Have some pieces of anti vibration pad in between washers and gimbal guard to reduce vibration.

flightschool610 said:
360 editing - power or action director on PC. I usually just stitch in gear 360 app on phone and upload to YT from there.

Mount - 6" 1/4 20 rod attached to gimbal guard via locknut and shaven down wingnut. Have some pieces of anti vibration pad in between washers and gimbal guard to reduce vibration.

Hi, are you still having trouble with GPS?
Try to disable wifi on gear 360

Yeah, disable camera's wifi for sure. B The Way I have flown the Samsung Gear 360 (2017) under my Mavic a number of times and , knock wood, not a hitch. I tried on P-4 pro but had some serious gyrations when trying to bring down maybe too fast.. All seems good with the Mavic, I think the key is not going too fast. Good luck!

Did I buy the wrong Camera

E
The cost(s) of working....Insight requested