Dutch version of 'know before you fly' campaign

Last week, I launched the campaign 'Vlieg je drone veilig', literally translated 'fly your drone safely'. It's the Dutch equivalent of the FAA's 'know before you fly' campaign, but in this case the campaign is a private initiative, not government funded. The problem is that in the Netherlands there was no good point with easy to understand information for hobby pilots. I aim to change that with this website.

It offers basic flying tips, a list of do's and don'ts, a map of no fly zones in the Netherlands and a list of supporters. The initiative was received very positive by the drone sector, some Dutch webshops already put 'Vlieg je drone veilig' banners on their websites and the campaign was mentioned in some newspapers.

I hope that similar initiatives will pop up in other countries too. Education is a very important aspect of this hobby and consumers should be able to easily find more information about safe flying. 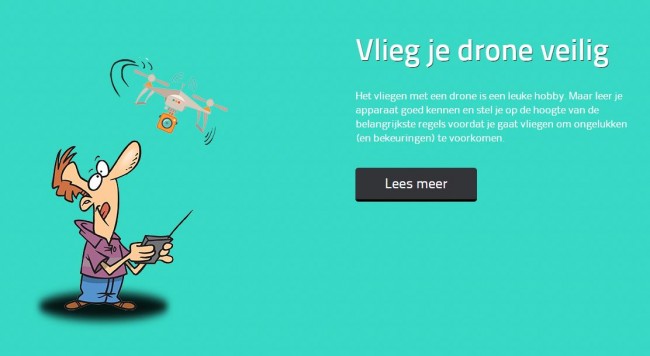 Expand signature
Do you happen to speak Dutch? Then have a look at my website http://www.dronewatch.nl, with the latest UAV news and drone videos. Also check out my book (in Dutch) on drone photography: Handboek dronefotografie. My newest website is about responsible drone flying: 'Vlieg je drone veilig'.
Reactions: cheebs

I thought that I had only one vested interest in Netherlands. ;-)
It's a shame you don't have an English version of your website,
Perhaps you might consider this option, in the future?

Good luck, it sounds like a positive direction, to help our sport and this hobby stay free from further unwanted obstructions by authority.